My life as a driving instructor by Rob Hulley

It was a number of years ago now that I decided to change careers and have a go at becoming a driving instructor in Sheffield. After many years I’d become fed up with my previous career in the service industry as a delivery and service provider, later on becoming a supervisor and then manager at two or three different retail companies. It was time for a change and as I’ve always enjoyed driving, driving instruction and the chance to meet new people and the positive rewards of helping them pass their driving test seemed like the ideal choice. It was, but there was a long road ahead.

Becoming a driving instructor for me was a long road. I was working long hours and so time to work at and practice becoming a driving instructor was difficult to put in, especially having a family and a young son. The training is made up of firstly passing a DBS/CRB check, to prove I was safe to work within the driving instruction industry, which I completed and passed. Then it was time to start my instructor training, which comprises of three exams, Part 1, 2 and 3. Part one is a Theory test of one hundred questions in which you must achieve above 85% in each of four sections and overall and also a Hazard Perception test in which a high score of over 57 out of 75 must be achieved. I bought the books and online DVD and with some help from my driving instructor trainer I got stuck in with the little time I had. Alongside this theory work I was taking lessons to pass the driving test after 20 years since I first passed at eighteen years old. Talk about bad habits in driving! I had 20 years as a white van driver. Looking back my instructor had his work cut out !!! HAHAHA

To my disappointment I failed the theory test 1st time. I scored 99 out of 100 (I still wonder which question I got wrong) but failed the hazard perception by 1 mark by being too hesitant. I wasn’t happy and just wanted to take it again. I booked the theory test again and passed with flying colours. First part done.

The Part 2 driver training was going well. I was not only having regular driving lessons (very important for all learner drivers) but very importantly I was also driving correctly while doing my job and when I was driving privately. This is very important for all you potential driving instructors out there, as it’s easy to slip back into your old habits. My friends were taking the you know what, but I knew what I wanted to be and what I wanted to achieve in life. More of the later. My trainer told me to book my test. I booked my part 2 and things were looking good. Taking my part 2 driving test was something I’ll always remember and hopefully will never forget as I was very nervous and still remember how nervous I was to this day. It still makes me remember how my pupils will be feeling when they go for their test. Something I think is that is important to remember as a driving instructor. The ADI practical test is marked exactly the same as the learner test, but you are only allowed a maximum of six driver faults and of course no serious or dangerous faults. I passed with six faults! Only just, but a pass it was and I could move on to part 3. Again I had learnt a lesson for my future career, which was to prepare your pupil to the highest of standards! I had just crept through the test, I need to make sure my pupils don’t just pass, but excel.

So my part three training started and alongside lots of private training and buddying up with other local PDI’s (potential driving instructors) I eventually felt ready to take the test. Teaching didn’t come easy to me, especially on the move. Being quite shy and never having taught before it took me some time to adapt. After taking redundancy from my job after twenty years, I actually went on a trainee licence after doing my forty hours training and felt it really helped me as I was teaching day to day. The trainee licence is something I would definitely recommend. So test day and if I thought I was ready I wasn’t. It was a disaster as I let the examiner totally take charge and lost control of the lesson. I’d made a complete mess of it !!! I now knew how my pupils feel when they fail. I just wanted to take it again straightaway as I knew what I’d done wrong. I couldn’t though and had to wait eight weeks to take it again. I went away and came back stronger. Taking my test at Barnsley test centre I made sure I was in control and passed my part three  test. I was now a fully qualified driving instructor  and would never to this day forget the examiner saying those words – ‘Congratulations you’ve passed your Driving Instructor Test’ 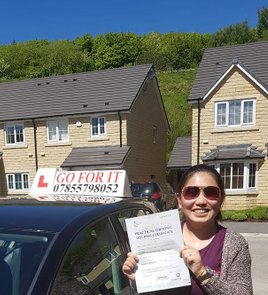 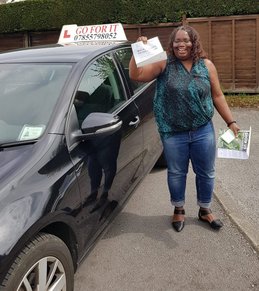 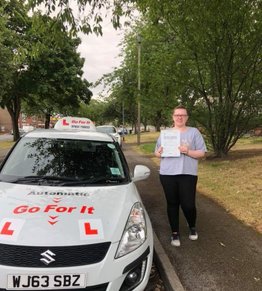 I’d joined a local school to do my trainee licence and had 12 months of the contract still to go. This was good in a way as after the contract finished I was getting quite a few recommendations. I bought a brand new Renault Clio, had graphics put on it and after I’d chosen the name for my new school/business – Go For It Driving School, I left. I’d got my advertising sorted in the yellow pages !!

I thought I’d gone mad paying two and a half thousand pounds for the advert, but it worked and I was up and running.  I really enjoyed the work and still do. At last I’d got a job I loved and was earning good money. The rewards were great and I still remember my first pass. Her name was ‘------‘ and though she failed first time she passed second time with flying colours. I now knew what standard I had to get my pupils to and it was to serve me well. Pass after pass came with very few fails. I once had a run of thirty seven 1st time passes !!! I still can’t believe the run I had, but it came through hard work and never letting my standards slip.

My aim wasn’t always to take on instructors, but it just sort of happened. As my diary filled up through my Yellow pages advert, I found I had spare work that I couldn’t service and when an instructor called me saying he was short of work I managed to fill him up and the rest really is history as more ADI’s joined Go For It on a franchise basis. It’s hard work but rewarding. Hard in that there is pressure as the ADI and his or her family are depending on me to pay their bills, but rewarding inthe fact we are doing that successfully and are helping people become ADI’s just like I did all those years ago. Hopefully this blog will inspire you to give it a go. If it does call me.  www.go-for-it.co.uk

So that’s the history of my road to becoming a driving instructor and building my business.

The new changes to the practical driving test were unvailed at Sheffield and other local test centres nearly 18 months ago. The aim was to reduce the number of young drivers involved in fatal collisions in South Yorkshire and the UK.

So, what were the changes?

The DVSA said “Operating car controls and in car entertainment goes some way to addressing the   concerns that many inexperienced drivers are easily distracted, which is one of the major causes of crashes. We aim to move with technology and the technology that new drivers are using.”Using a Sat Nav must be done with great care and attention to the road ahead, with many drivers admitting having ‘near-misses’ caused by the distraction of a sat nav. Examiners will be testing a pupils ability to not only listen to a sat nav without being distracted, but to also read the satnav while still keeping control of the car while the car is moving. DVSA Chief Executive, Gareth Llewellyn, said: “Great Britain’s roads are among the safest in the world. But there is scope to do more to keep road users safe – particularly newly qualified drivers. Making sure the test better assesses a driver’s ability to drive safely and independently is part of our strategy to help every driver through a lifetime of safe driving”.

So what are my thoughts – I personally think it’s a great move and the new manoeuvres etc are definitely more life like and prepare the pupil more thoroughly for life on the road. Our Go For It driving instructors in Sheffield, Rotherham, Chesterfield and Worksop are implementing all the new test changes.

More and more technology is available in cars these days and can be distracting, especially to a new driver. Introducing the Satnav part of the test was a very important. There were many stories over the years of accidents happening when people used a satnav. Some with disastrous consequences. I myself was nearly in a very bad crash with a pupil who I had helped pass the day before!!! The satnav wasn’t part of the test in those days and fortunately I managed to carry out an emergency stop which prevented my former pupil hitting me side on as he followed his satnav’s instruction to follow the road ahead when actually the road went round a bend that I was coming round. He just missed my front end but only because of my quick thinking. I worried me that much I actually wrote to the DVSA mentioning what had happened and that it may be worth putting in the test. The same pupil went on to take a PASS Plus course with me a few days later and his satnav again told him twice to do two illegal manoeuvres that could have resulted in crashes.

Rob’s tip- Keep your satnav updated and don’t totally rely on it! Read the road ahead also and read the signs.

On the new forward bay park manoeuvre – Great idea as we all park forward into bays, where ever we go, but everyone struggles with it at first. My only scrape in many years of driving was parking forwards into a tight gap as I short sided myself and scraped the back corner of my car. My son’s only scrape was exactly the same fault!! There’s a pattern !!

Rob’s tip – If you’re turning right into a bay try to get as far left as possible and vise versa to bays on the left.

And on the parking on the right – Only today I had someone pull out on me as they set off from the wrong side of the road. It happens regularly in day to day driving so was a good addition and will help everyone.

Rob’s tip – Always try and park on the left

So is the new test better?

Does it better prepare young drivers for life on the road?

Rob’s thoughts – It sure does